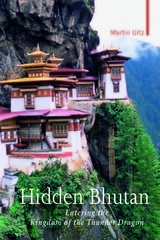 In 2006 Time magazine listed the King of Bhutan, Jigme Singye Wangchuk, as one of the 100 "leaders and revolutionaries" who are changing our world today. Yet it was only in the 1960s that the first road linking the Kingdom of the Thunder Dragon with India was opened, and since 1974 only a strictly limited number of tourists have been allowed to visit each year. Martin Uitz, a renowned expert on Bhutan, describes how the Bhutanese, in pursuit of the principle of "Gross National Happiness", are carefully moving towards a more modern future, including a constitution and democracy, whilst preserving their traditional society and attempting to conserve the environment. Uitz made many fascinating discoveries in this enigmatic Kingdom. He was able to explain why the only traffic light was taken out of service, why six men are not allowed to go on a journey together, and what the subtle eroticism of a traditional hot-stone bath is all about. Along the way he also discovered that the Bhutanese hills are more alive with Edelweiss than the hills around his native Salzburg.
AUTHOR BIOGRAPHY
Uitz Martin (1952-2007), traveled to the most remote areas of the Himalayas from the early 1970s. After two decades spent as a tour operator and tourism advisor with the Austrian Development Cooperation of Bhutan, and then lived as a freelance writer in the Kingdom until his death.
TABLE OF CONTENTS