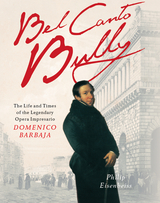 BUY FROM
Bel Canto Bully: The Life and Times of the Legendary Opera Impresario Domenico Barbaja
by Philip Eisenbeiss
Haus Publishing, 2013
eISBN: 978-1-908323-30-9
Cloth: 978-1-908323-25-5
Unscrupulous, devilishly ambitious and undeniably charismatic, Domenico Barbaja was the most celebrated Italian impresario of the early 1800s and one of the most intriguing characters to dominate the operatic empire of the period. Dubbed the "Viceroy of Naples", Barbaja managed both the Teatro di San Carlo in Naples and La Scala in Milan. He was the influential force behind the careers of a plethora of artists including Vincenzo Bellini, Gioachino Rossini and the great mezzo-soprano Isabella Colbran, who became Barbaja's lover before eventually deserting him to marry Rossini. Most vitally, Barbaja's vision had an irrevocable impact on the history of Italian opera; determined to create a lucrative business, he cultivated an energetic environment of new artists producing innovative, exciting opera that people would flock to hear. Philip Eisenbeiss brilliantly pieces together the forgotten story of a tireless tyrant who began life as a barely educated coffee waiter, yet grew to be one of the richest and most potent men in Italy. A natural entrepreneur, Barbaja had the ability to predict a sensation; a skill he exploited his entire life, forging his fortune as a café-owner, arms profiteer, gambling tycoon and eventually, opera magnate. Eisenbeiss unlocks the enigma of this eccentric and fascinating personality that has been hitherto neglected.
AUTHOR BIOGRAPHY
Philip Eisenbeiss has been living in Hong Kong for the past 20 years, where he has wored as a banker and financial headhunter. After extended training as an opera singer, he started his career in journalism.