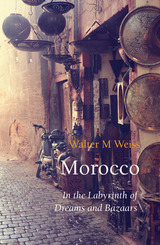 While much of the Middle East is now engulfed in conflict and repression, Morocco remains a curious anomaly: peaceful and open to the West, it has provided refuge for artists and writers for generations, and it remains an exotic destination for many curious travelers. The country has been influenced by an incredible variety of peoples—Phoenicians, Romans, Arabs, Berbers, Muslims, Jews, and most of Europe’s colonizers have played a role—and modern Moroccan society is no less rich and varied.

In Morocco, Walter M. Weiss brings extensive knowledge of the region to bear as he travels the breadth and depth of the country’s social and geographical contrasts. Berber villagers of the mountains are for the most part still illiterate and consider their king to be divinely chosen, while businessmen in Casablanca’s towering offices dream of closer ties to the European Union. Weiss visits the settings of modern legends, such as Tangier, as well as the two medieval centres Fès and Meknès, and sees earthen kasbahs and Marrakech’s bazaar. On the way, he meets acrobats, Sufi musicians, pilgrims, craftsmen, beatniks, rabbis, and Berber farmers—a kaleidoscope of variety and cultural influence.
AUTHOR BIOGRAPHY
Walter M. Weiss is a writer based in Vienna. Stefan Tobler is the publisher and founder of And Other Stories.
REVIEWS
“Weiss stumbles across an array of characters from acrobats and pilgrims to beatniks and Rabbis—the result is a gripping book with no filler whatsoever.”
— Glasgow Herald

“Weiss darts from café to kasbah with refreshingly frank observations of a culture prone to dazzling visitors with its exoticism.”
— Times Literary Supplement


The Gateway to Africa
Coexistence in Morocco
Paradise in this world and the next
Hippy town and hotbed of resistance
First Interruption: ça va?
Only look!
From the hammam to a full stomach, via hell
The healing powers of the dead
Second interruption: travel as a political choice
Trip to the edge of time
Moulay Ismail’s legacy
Inside the bastion of power
Living and praying in the white house
Seaside snapshots
Among acrobats, storytellers and poets
An oasis of luxury and fashions
Barren lands and iron dogmas
In Hollywood’s holy land
52 days to Timbuktu
Glossary