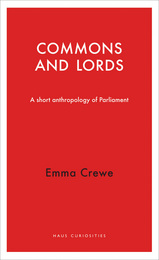 The British Parliament rewards close scrutiny not just for the sake of democracy, but also because the surprises it contains challenge our understanding of British politics. Commons and Lords pulls back the curtain on both the upper House of Lords and the lower House of Commons to examine their unexpected inner workings.

Based on fieldwork within both Houses, this volume in the Haus Curiosities series provides a surprising twist in how relationships in each play out. The high social status of peers in the House of Lords gives the impression of hierarchy and, more specifically, patriarchy. In contrast, the House of Commons conjures impressions of equality and fairness between members. But actual observation reveals the opposite: while the House of Lords has an egalitarian and cooperative ethos that is also supportive of female members, the competitive and aggressive House of Commons is a far less comfortable place for women. Offering many surprises and secrets, this book exposes the sheer oddity of the British parliament system.
AUTHOR BIOGRAPHY
Emma Crewe is a principal investigator in the Department of Anthropology and Sociology at SOAS, University of London. She is the author of several books on politics and the parliamentary system.
TABLE OF CONTENTS