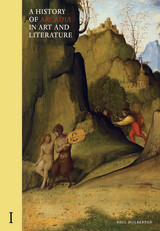 A History of Arcadia in Art and Literature is an unprecedented exploration of the pastoral through the close examination of original texts of classical and early and later modern pastoral poetry, literature, and drama in ancient Greek, Latin, Italian, French, Spanish, Portuguese, Dutch, German, and English, as well as of a wide range of visual imagery. The book is an iconographic study of Renaissance and Baroque pastoral and related subject matter, with an important chapter on the eighteenth century, both in the visual arts, where pastoral is poorly understood, and in words and performance, about which many false preconceptions prevail.

The book begins with Virgil’s use of Theocritus and an analysis of what basis Virgil provided for Renaissance pastoral and what, by contrast, stemmed from the medieval pastourelle. Paul Holberton then moves through a remarkable range of works, addressing authors such as Petrarch, Tasso, Guarino, Lope de Vega, Cervantes, and Shakespeare, and artists such as Giorgione, Claude, Poussin, Watteau, Gainsborough, and many more. The book serves simultaneously as a careful study, an art book full of beautiful reproductions, and an anthology, presenting all texts both in the original language and in English translation.
AUTHOR BIOGRAPHY
Paul Holberton is known as an authority on Giorgione and has published extensively on the iconography of art. He writes primarily about the Italian Renaissance and is the author of Palladio’s Villas: Life in the Renaissance Countryside.
TABLE OF CONTENTS
Contents: Volume One
Introduction
Debts
One: Coming Together (Or Going Apart) to Sing
Two: The Invention of Arcadia
Three: The Polyglot and Polymorphous Constituency of Pastoral
Four: The Wilderness's Appealing Inhabitants
Five: Carmen Elegiacum Bucolicum
Six: Some Versions of Landscapes
Seven: Courteous Love
Eight: Amor Voul Fe
Nine: Only Faith and Troth
Ten: The Pastoral Vignette