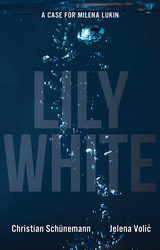 Jelena Volić and Christian Schünemann’s latest thriller follows a case for criminologist Milena Lukin, the protagonist of their previous novels Cornflower Blue and Peony Red. Set in Belgrade, a city of flux between East and West, Lily White is a complex and riveting new story that once again will take Lukin to the dark heart of Serbia’s past.

Bouquets of white lilies are mysteriously laid in a Belgrade street where, years earlier, a small Romani boy was beaten to death by two youths. One of the attackers was apprehended and imprisoned. The other was allowed to flee and, after twenty-five years on the run, he returns to Belgrade to confront his past. Days later, his corpse is found floating in the Danube River. After a cursory investigation, the police declare it to have been suicide and close the case, but the dead man’s lawyer and the criminologist Milena Lukin begin an investigation of their own. They soon stumble upon a clue that leads them into the darkest recesses of Serbian politics and to the root of a murder that shaped the fate of a country.
AUTHOR BIOGRAPHY
Christian Schünemann is a journalist who has worked in Moscow and Bosnia-Herzegovina. He received the Helmut Stegmann Prize for Journalism in 2001. Jelena Volić is an academic, lecturing in modern German literature. She lives in Belgrade and Berlin. Baida Dar is an independent translator based in London.