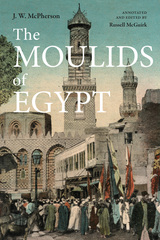 This book is a study of moulids, the popular Egyptian religious festivals (Muslim and Christian) as they were in the first half of the 20th century. Moulids also had a secular side, where sports, games, theatres, shadow-plays, beer booths, sweet stalls, eating houses, dancing, and laughter, were as much part of the festival as the religious processions and the whirling of dervishes. Nor were the festivals exclusive to one religion or the other—Muslims and Christians happily attended each other’s moulids.

Some of the rites and customs date from as far back as the Pharaonic period, but the moulids are gradually dying out. Many of the 126 festivals described here have since faded away, making the book of lasting interest.

Published in Cairo at the height of the Second World War, Bimbâshî McPherson’s The Moulids of Egypt is a fascinating and highly original contribution to the study of the country’s religious folklore and practice.
REVIEWS
‘An invaluable work…a superb first-hand glimpse of the life of Egypt’—Lawrence Durrell

Excerpt From
The Moulids of Egypt
McPherson J. W.
https://itunes.apple.com/WebObjects/MZStore.woa/wa/viewBook?id=0
This material may be protected by copyright.