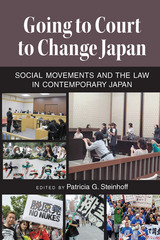 Going to Court to Change Japan takes us inside movements dealing with causes as disparate as death by overwork, the rights of the deaf, access to prisoners on death row, consumer product safety, workers whose companies go bankrupt, and persons convicted of crimes they did not commit. Each of the six fascinating case studies stands on its own as a detailed account of how a social movement has persisted against heavy odds to pursue a cause through the use of the courts.
The studies pay particular attention to the relationship between the social movement and the lawyers who handle their cases, usually pro bono or for minimal fees. Through these case studies we learn much about how the law operates in Japan as well as how social movements mobilize and innovate to pursue their goals using legal channels. The book also provides a general introduction to the Japanese legal system and a look at how recent legal reforms are working.
Going to Court to Change Japan will interest social scientists, lawyers, and anyone interested in the inner workings of contemporary Japan. It is suitable for use in a wide range of undergraduate and graduate courses on Japan in social sciences and law, and can also provide a comparative perspective to general courses in these fields. Contributors include John H. Davis Jr., Daniel H. Foote, Patricia L. Maclachlan, Karen Nakamura, Scott North, Patricia G. Steinhoff, and Christena Turner.
AUTHOR BIOGRAPHY
Patricia G. Steinhoff is Professor of Sociology at the University of Hawaii. Her primary research interest is social movements, civil society, and radical left groups in Japan. Most of her numerous publications concern Japan, including three books in Japanese. She recently edited Destiny: The Secret Operations of the Yodogo Exiles, an English translation of Takazawa Koji, Shukumei: Yodogo Bomeishatachi no Himitsu Kosaku.
TABLE OF CONTENTS
Cover
Title
Copyright
Contents
Preface
Introduction
1. No Helmets in Court, No T-Shirts on Death Row: New Left Trial Support Groups
2. Karōshi Activism and Recent Trends in Japanese Civil Society: Creating Credible Knowledge and Culture
3. Courting Justice, Contesting “Bureaucratic Informality”: The Sayama Case and the Evolution of Buraku Liberation Politics
4. Becoming Unforgettable: Leveraging Law for Labor in Struggles for Employment Security
5. Suing for Redress: Japanese Consumer Organizations and the Courts
6. No Voice in the Courtroom: Deaf Legal Cases in the 1960s
7. Cause Lawyering in Japan: Reflections on the Case Studies and Justice Reform
List of Contributors
Index
REQUEST ACCESSIBLE FILE