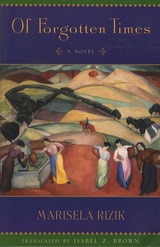 Of Forgotten Times
by Marisela Rizik
translated by Isabel Z. Brown
Northwestern University Press, 2004
Paper: 978-1-931896-00-9
Of Forgotten Times is at once about romance, about mothers and daughters, and about a dictatorship. Set in a fictional Caribbean island, it begins at the time of the conquistadors and ends in relatively modern times. The novel focuses on the stories of the women of two different families whose only point in common is the dictator who rules their island nation. One set of women, the Parduz family, is descendant of green-eyed slaves who practice voodoo-like rituals even through modern times in a village so distant from the major cities that ancient practices continue to have relevance in the present. The other set of women, the Valverde family, is a mother and daughter who seek to find a way out of the endemic conditions of poverty. Of Forgotten Times describes life in a country ruled by a ruthless, power-hungry, machista tyrant who is married to Herminia Parduz and whose lover, among others, is Mercedes Valverde.
AUTHOR BIOGRAPHY
Writer and filmmaker Marisela Rizik was born in Santa Domingo and has lived in Eugene, Oregon since 1981. Her stories, articles, and essays have appeared in various North American journals. Of Forgotten Times is her first novel, originally published in Spanish in Santa Domingo in 1996.

Translator Isabel Z. Brown is an associate professor of Spanish at The University of South Alabama in Mobile. Born in Paris, she has resided in various countries, including the Dominican Republic. She lives in Mobile, Alabama with her husband and their three children.