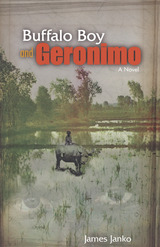 The unique vision in Janko's Buffalo Boy and Geronimo is the depiction of the Vietnam War as seen through the lens of a wounded but resilient nature, as a Confucian society still rooted in the earth and the unbroken fabric of ancestors is pitted against a desensitized military high-tech culture. As critic Paul Pines noted, "The forces here that seek to conquer the landscape are those, which by implication, shatter the harmonious fabric of the natural world to create a pathology that is far deeper than the political stakes indicate—one that indeed may determine the future of the entire ecosphere."

The two heroes of the book, Nguyen Luu Mong, the Vietnamese buffalo boy, and Antonio Lucio, the US Chicano medic (Geronimo), both have a deep respect for the natural world, and it is through their eyes that we witness the devastation of the natural world of which they are a part.

Geronimo's unit is engaged in search and destroy missions, and he becomes appalled by the pain and death inflicted on animals and humans. Eventually, he deserts and finds his way back into the jungle. Meanwhile, the young adolescent Mong loses his beloved buffalo in an early firefight and eventually sees his entire village destroyed, the survivors relocating deeper into Viet Cong territory.

James Janko was a medic in the Vietnam War. His work has appeared in numerous literary journals and was twice nominated for the Pushcart Prize. Buffalo Boy and Geronimo was his first novel; his second novel, The Clubhouse Thief, was released in 2018.