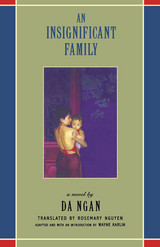 An Insignificant Family
by Da Ngan and Wayne Karlin
translated by Rosemary Nguyen
Northwestern University Press, 2009
Paper: 978-1-931896-48-1
Beginning in Vietnam shortly after the end of the American war and ending sometime in the 21st century, this 8th volume of Curbstone's Voices from Vietnam Series follows the life of Nguyen Thi My Tiep, a woman writer and a revolutionary, whose girlhood is spent as a guerrilla fighter, and whose post-war life becomes a search for personal liberation and individual love. Tiep's struggles are seamlessly connected to the changes her country is going through, as Da Ngan's daring and controversial novel draws us into the life of a woman who insists on leading a meaningful and honest life—as a citizen, as a daughter, as a mother, as a writer, and as a lover who pursues her own sexuality.

Da Ngan was born in 1952 in Can Tho, Vietnam, and served in the Southern Liberation Forces during the American War. She has written a number of novels and short story collections. An Insignificant Family won the prize for best fiction from the Union of Writers in Hanoi in 2005, and is Da Ngan's first novel in English to be published in the United States