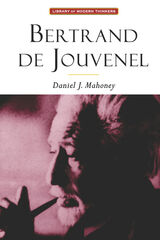 In his effort to detach the indispensable notion of the common good from its historical identification with the more closed, homogeneous, and static societies of the premodern past, the French political philosopher Bertrand de Jouvenel (1903-87) pointed the way towards a viable conservative liberalism. So argues Daniel J. Mahoney in this compelling introduction to the life and work of Jouvenel, one of twentieth-century France's most profound philosophers and political essayists. Although he vigorously defended the historical achievement of liberal society against its totalitarian critics, Jouvenel also challenged the modern conceit that man is an autonomous being beholden neither to the moral law nor to the humanizing inheritance of the past. Mahoney's study focuses on Jouvenel's three masterworks On Power (1945), Sovereignty (1955), and The Pure Theory of Politics (1963) and on his broader effort to defend civility and social friendship against rationalist individualism and its logical fruit, collectivist politics. Mahoney explores Jouvenel's affinities with and debts to Aristotle, Burke, Rousseau, and Tocqueville, and he contrasts Jouvenel's signal theoretical achievements with the twists and turns manifested in his (sometimes questionable) practical political engagements from the 1930s until his death. Mahoney's characteristically engaging appraisal of this important political philosopher, the fifth entry in ISI Books' Library of Modern Thinkers series, is the first book on Jouvenel to appear in the English language.
AUTHOR BIOGRAPHY
Daniel J. Mahoney is Professor of Politics at Assumption College in Worcester, Massachusetts. A renowned expert on French political philosophy, his books include the critically acclaimed Aleksandr Solzhenitsyn: The Ascent from Ideology, (Rowman & Littlefield, 2001).
TABLE OF CONTENTS


Chapters Include:Introduction: The Itinerary of a Conservative LiberalTaming the Minotaur: The Nature and Limits of PowerBeyond the ?Prison of the Corollaries?: Liberty and the Common GoodThe Spirit of Sovereignty and the ?Regulated Will?Economics and the Good LifeThe Specter of Bellicose PoliticsPolitical Philosopher and ?Voyager in the Century?