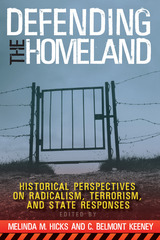 Terrorism and national security have been in the foreground of the nation’s political landscape since the uncertain times brought on by the attacks of September 11, 2001. This collection of scholarly essays provides a chance to learn from the past by offering an analytic—and sometimes provocative—look at the inseparability of security and history. This work is divided into separate elements depicting security on the national and international levels. "Part One–The US and National Security," focuses on topics such as “Rank-And-File Rednecks: Radicalism and Union Leadership in the West Virginia Mine Wars,” among others. "Part Two–International Terrorism," looks at violence overseas, such as “Beyond Victims and Perpetrators: Women Terrorists and Their Own Stories.”

C. Belmont Keeney and Melinda M. Hicks obtained the idea for Defending the Homeland when they reviewed submitted papers for the 2005 Senator Rush D. Holt History Conference at West Virginia University. While the conference produced a variety of excellent presentations, some of the scholarship stood out so much that they felt it deserved a broader audience.  Kenney is an author, historian musician, professor, and mountaineer. Hicks is a Visiting Professor of History, Marietta College, Ohio.