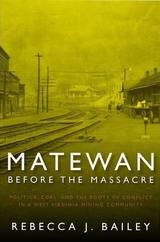 On May 19, 1920, gunshots rang through the streets of Matewan, West Virginia, in an event soon known as the “Matewan Massacre.” Most historians of West Virginia and Appalachia see this event as the beginning of a long series of tribulations known as the second Mine Wars. But was it instead the culmination of an even longer series of proceedings that unfolded in Mingo County, dating back at least to the Civil War? Matewan Before the Massacre provides the first comprehensive history of the area, beginning in the late eighteenth century continuing up to the Massacre. It covers the relevant economic history, including the development of the coal mine industry and the struggles over land ownership; labor history, including early efforts of unionization; transportation history, including the role of the N&W Railroad; political history, including the role of political factions in the county’s two major communities—Matewan and Williamson; and the impact of the state’s governors and legislatures on Mingo County.

Rebecca “Becky” Bailey’s family roots are in McDowell and Mercer Counties in West Virginia. She first learned about Matewan through stories her coal miner grandfather told about witnessing Sid Hatfield’s murder. Later, when she came to West Virginia University to study public history, she was hired to help collect oral histories in Matewan and Mingo County. She wrote Matewan Before the Massacre because she could not let the story go.


May 19, 1920 1 “Bleeding Mingo”: 1895–1911 The Progressive Era? The Williamson-Thacker Coalfield Falls Behind World War I and The Rise of Class Tensions The Massacre: Before and After Conclusion: The Matewan Myth Bibliography Index