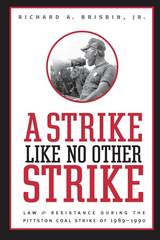 The miners' strike against Pittston Coal in 1989–1990, which spread throughout southwestern Virginia, southern West Virginia, and eastern Kentucky, was one of the most important strikes in the history of American labor, and, as Richard Brisbin observes, "one of the longest and largest incidents of civil disorder and civil disobedience in the United States in the second half of the twentieth century." The company aggressively sought to break the strike, and workers and their families used a variety of tactics—lawful and unlawful—to resist Pittston's efforts as the situation quickly turned ugly.

In A Strike like No Other Strike: Law and Resistance during the Pittston Coal Strike of 1989–1990, Richard Brisbin offers a compelling study of the exercise of political power. In considering the legal significance of the strike, Brisbin asks the larger question of whether even extreme transgression or resistance can fracture the "imagined coherence of the law." He shows how each party in the strike invoked the law to justify its actions while attacking those of the other side as unlawful. In the end, both sides lost; although the U.S. Supreme Court ultimately ruled in favor of the union, most of the strikers faced elimination of their jobs and an ongoing struggle for pensions and health benefits.

Richard A. Brisbin, Jr., is an associate professor of political science at West Virginia University. He is the author of Justice Antonin Scalia and the Conservative Revival, available from Johns Hopkins University Press.