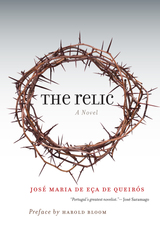 The Relic is an irreverent fictional autobiography narrating the picaresque adventures of Teodorico, a Portuguese playboy determined to be the sole heir of his absurdly pious, sexually repressed, and tyrannical Auntie. Sent to the Holy Land, he returns with what he presumes is the "relic of relics" in hopes of persuading Auntie to bequeath her vast fortune to him. While in Jerusalem, Teodorico has a vision in which he witnesses Christ's trial and crucifixion and the founding of Christianity—with a twist.
AUTHOR BIOGRAPHY
JOSÉ MARIA DE EÇA DE QUEIRÓS (1845–1900), Portugal's foremost novelist of the nineteenth century, is the author of The Maias and The Correspondence of Fradique Mendes.
REVIEWS

The Relic is a work of absolute comic genius, an invention provocative of outrageous laughter.