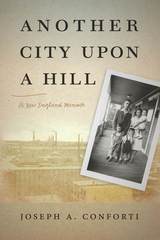 This gripping memoir is both a personal story and a portrait of a distinctive New England place—Fall River, Massachusetts, once the cotton cloth capital of America. Growing up, Joseph Conforti's world was defined by rolling hills, granite mills, and forests of triple-deckers. Conforti, whose mother was Portuguese and whose father was Italian, recounts how he negotiated those identities in a city where ethnic heritage mattered. Paralleling his own account, Conforti shares the story of his family, three generations of Portuguese and Italians who made their way in this once-mighty textile city.
AUTHOR BIOGRAPHY
JOSEPH A. CONFORTI is Distinguished Professor of American and New England Studies Emeritus at University of Southern Maine. He is the author of five books, including Saints and Strangers: New England in British North America and the acclaimed Imagining New England: Explorations of Regional Identity from the Pilgrims to the Mid-twentieth Century.
REVIEWS

An expert historian's wonderfully honest memoir of growing up in Fall River, 'the city of hills, mills, and dinner pails.' It's an authentic American story, beautifully told.