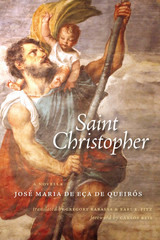 Set in the Middle Ages but written in the early twentieth century, Eça de Queirós's novella, Saint Christopher, is a powerful indictment of those who profess the value of morality but who do not practice it. The narrative is just as relevant today—when issues of religion, hypocrisy, and social justice are more urgent than ever—as it was when it first appeared in 1912. Written as though it were the product of a dialogue between Jesus and Proudhon (whose theories animate much of the narrative), Saint Christopher challenges today's ethically motivated reader to do what the narrative's protagonist does, that is, take up the cause of the wretched and abused of this earth.
AUTHOR BIOGRAPHY
JOSÉ MARIA DE EÇA DE QUEIRÓS (1845–1900) is Portugal's foremost author of the nineteenth century and its most celebrated novelist before José Saramago. He is the author of The Maias, The Relic, and The Correspondence of Fradique Mendes. GREGORY RABASSA, Professor Emeritus of Hispanic Languages and Literatures at Queens College and The Graduate School, CUNY, has translated more than forty works from Portuguese and Spanish. EARL E. FITZ is professor of Portuguese, Spanish, and comparative literature at Vanderbilt University.