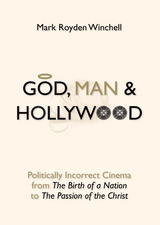 God, Man, and Hollywood: Politically Incorrect Cinema from The Birth of a Nation to The Passion of the Christ
by Mark Royden Winchell
Intercollegiate Studies Institute, 2008
Cloth: 978-1-933859-56-9
It takes no great powers of observation to see that Hollywood has long been far to the left of the general American public. Even in stories that have no overt political content, the social and moral assumptions in films rated from GP to R are often at odds with the deeply held values of most of the viewing audience. But that’s not the whole story, argues the literary and cultural critic Mark Royden Winchell in God, Man, and Hollywood. A surprising number of films articulate culturally unfashionable attitudes—and it is from these movies that we learn the most about our society and ourselves.

Beginning with D. W. Griffith’s The Birth of a Nation and ending with Mel Gibson’s The Passion of the Christ, Winchell reveals the politically incorrect notions at the heart of eighteen classic films, including Ben-Hur, Intruder in the Dust, The Man Who Shot Liberty Valance, Patton, The Deer Hunter, A Clockwork Orange, Gangs of New York, and Gettsyburg. Along the way, he shows how a number of filmmakers, sometimes unwittingly, have produced unconventionally honest explorations of the nature and meaning of race relations, love, family, community, worship, and other aspects of our shared human experience. Winchell ends with synoptic assessments of an additional one hundred politically incorrect films, from About Schmidt to Zulu. The result is an indispensable film guide showing that sometimes even Hollywood has done better than we typically give it credit for.
AUTHOR BIOGRAPHY
Mark Royden Winchell is professor of English at Clemson University, where he also directs Clemson’s program in the Great Works of Western Civilization. He is the author of books on Joan Didion, William F. Buckley Jr., and neoconservative criticism and of authorized biographies of literary critics Donald Davidson and Leslie Fiedler, among other volumes. During the past quarter century he has published over 120 essays and reviews in such periodicals as Modern Age, the American Conservative, and the Sewanee Review.