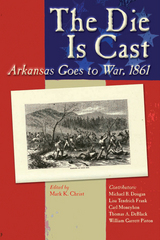 Five writers examine the political and social forces in Arkansas that led to secession and transformed farmers, clerks, and shopkeepers into soldiers. Retired longtime Arkansas State University professor Michael Dougan delves into the 1861 Arkansas Secession Convention and the delegates’ internal divisions on whether to leave the Union. Lisa Tendrich Frank, who teaches at Florida Atlantic University, discusses the role Southern women played in moving the state toward secession. Carl Moneyhon of the University of Arkansas at Little Rock looks at the factors that led peaceful civilians to join the army. Thomas A. DeBlack of Arkansas Tech University tells of the thousands of Arkansans who chose not to follow the Confederate banner in 1861, and William Garret Piston of Missouri State University chronicles the first combat experience of the green Arkansas troops at Wilson’s Creek.
AUTHOR BIOGRAPHY
Mark K. Christ is community outreach director for the Arkansas Historic Preservation Program and lives in Little Rock, Arkansas. He is the editor of Ready, Booted, and Spurred: Arkansas in the U.S.–Mexican War (Butler Center Books).
TABLE OF CONTENTS
Contents
Contributors
Introduction
“An eternal chitter chatter kept up in the galleries" : The Arkansas Secession Convention in Action, March - June, 1861
Domesticity Goes Public: Southern Women and the Secession Crisis
Why They Fought: Arkansans Go To War, 1861
“A Remarkably Strong Union Sentiment" : Unionism in Arkansas in 1861
“When the Arks. boys goes by they take the rags off the bush" : Arkansans in the Wilson's Creek Campaign of 1861
Notes
Index
REQUEST ACCESSIBLE FILE