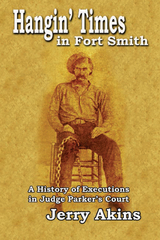 For twenty-one years, Judge Isaac C. Parker ruled in the federal court at Fort Smith, Arkansas, the gateway to the wild and lawless Western frontier. Parker, however, was not the "hangin' judge" that casual legend portrays. In most cases, the guilt or innocence of those tried in his court really was not in question once their stories were told. These horrible crimes would have screamed out for justice in any circumstance. Author Jerry Akins has finally arrived at the real story about Parker and his court by comparing newspaper accounts of the trials and executions to what has been written and popularized in other books.
AUTHOR BIOGRAPHY
Jerry Akins is a native of Kansas City, Missouri, and worked as a missile technician for fourteen years. In 1980, he relocated to Fort Smith, Arkansas, where he began to immerse himself in the history of the area, including the U.S. District Court for the Western District of Arkansas and the cases of Judge Isaac C. Parker. He is a frequent contributor to the Fort Smith Historical Society Journal.
TABLE OF CONTENTS
Contents
Foreword
Acknowledgements
Introduction
Chapter 1: The Beginning: The Black Cup
Chapter 2: Two Men Hanged, Both Cherokees, for Murder
Chapter 3: "The Awful Doom"
Chapter 4: "My Father...Brought to the Scaffold"
Chapter 5: "Eight Murderers Tried and Convicted in a U.S. Court"
Chapter 6: "The Black Cap, The Black Gown: Six Men Atone for Crime"
Chapter 7: "Doomed: Six Men Condemned to Die at One Time"
Chapter 8: Four Men Executions: "Murder Cries Aloud for Vengeance"
Chapter 9: The Gallows Gets a Two-Year Hiatus
Chapter 10: "A Victim for the Gallows: Hanging Too Good for Him"
Chapter 11: "The Law Vindicated"
Chapter 12: "Five Trapdoor Angels Sent to that Bourne"
Chapter 13: Edward Fulsom, Hired Gun or Accidental Accomplice?
Chapter 14: Cattle Drives, Outlaws, and a Hanging
Chapter 15: "Three Lives for Six"
Chapter 16: Three Down, Three to Go
Chapter 17: Execution of William Phillips
Chapter 18: James Arcine and William Parchmeal
Chapter 19: A New Gallows for New Customers
Chapter 20: Sprole and James Hanged
Chapter 21: Kitt Ross Executed
Chapter 22: Lust, Revenge, and Bad Tempers Send Four to Gallows
Chapter 23: Pat McCarty's Respite Expires, And With It, Patrik McCarty
Chapter 24: The Executions of Seaborn Kalijah and Silas Hampton
Chapter 25: Seven Sentenced, Three Hang
Chapter 26: Gus Bogle
Chapter 27: His Boots Were His Downfall
Chapter 28: Three Senseless Murders, Two Hangings
Chapter 29: "Broke Their Necks: That's What Hangman Maledon Did"
Chapter 30: "Gallows Fruit"
Chapter 31: "Murdered the Fiddler"
Chapter 32: "John Stansberry Hanged for the Murder of His Wife"
Chapter 33: Boudinot Crumpton, a.k.a. Bood Burris
Chapter 34: Shepard Busby Hangs for the Murder of Deputy Connelly
Chapter 35: "Bowing and Smiling, John Thorton Marches Forth"
Chapter 36: "Lewis Holder, The Slayer of George M. Bickford"
Chapter 37: The Execution of John Pointer
Chapter 38: The Execution of Crawford Goldsby, a.k.a. Cherokee Bill
Chapter 39: Webber Isaacs, Mollie King, Berry Foreman, and George and John Pierce
Chapter 40: The Buck Gang: Ten-Day Terrors
Chapter 41: The Last Man to Go: James Calvin Casherego
Epilogue: The End of an Era
References
Index
REQUEST ACCESSIBLE FILE