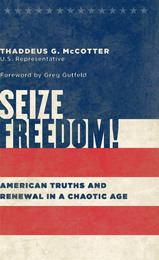 Right now, parents suffer sleepless nights worrying that they will lose their jobs, their homes, and their hopes for their children. Citizens struggle to make sense of an increasingly perverse society disdainful of—and destructive to—the traditional culture of faith, truth, virtue, and beauty. Government—under both parties—has swollen to grotesque proportions, racked up staggering debt, and become a threat to Americans’ freedom.

In the aftermath of a historic election, fueled by citizens willing to stand against a government seemingly aligned against them, U.S. Representative Thaddeus McCotter makes a spirited cry for sanity in a chaotic age. Seize Freedom! boldly confronts the quartet of generational challenges that too many leaders ignore or belittle, and charts the path of truth and renewal for America.

So many of our problems, the author shows, have been exacerbated by ideology, which John Adams aptly called the “science of idiocy.” With incisive thought and wicked humor McCotter attacks the idiocy that pervades Washington. He wisely calls for ridding ourselves of ideology as the first step to transcending our great challenges, which include:

•The social, economic, and political upheavals of globalization: McCotter points the way to a free, prosperous, and humane twenty-first-century economy
•A world war against evil enemies: Seize Freedom! shows why we are engaged not in a War on Terror but in a War for Freedom
•Communist China as a strategic threat: The author explains how the United States must contain this repressive, expansionist regime
•Moral relativism’s erosion of our self-evident truths: McCotter reveals why faith, family, community, and country remain cornerstones of America’s greatness


In ancient Athens, the patriot Demosthenes pleaded with a prideful and pampered people to confront threats to their liberty: “In God’s name, I beg of you to think. The Athenians refused to listen, falling sway to demagogues who dismissed the dangers. Soon their civilization was crushed.

Seize Freedom! is a guide for those concerned citizens and committed conservatives who wish to put an end to the ideologues’ simplistic solutions and false comforts. Well, that, and for anyone who wants a remedy for the usual ghostwritten claptrap that passes for “policy” or “campaign” books. This book won’t make you happier, but it will make you smarter.

AUTHOR BIOGRAPHY
Thaddeus G. McCotter is the U.S. representative for Michigan’s Eleventh District. He has written for the American Spectator, the Detroit News, Human Events, and Andrew Breitbart’s Big Hollywood, among numerous publications and splenetic websites. McCotter, who graduated summa cum laude from the University of Detroit and earned his J.D. from the University of Detroit Law School, lives in his hometown of Livonia, Michigan, with his wife, their three children, and his Stratocaster.
TABLE OF CONTENTS
Table of Contentiousness
Foreword: March! by Greg Gutfeld
1. What We Face
2. "The Science of Idiocy"
3. Too Free to Fail
4. Win Our War for Freedom
5. Deter the Dragon
6. Cherish Life
7. Our Blessed Sanctuary of Liberty
Appendix: Conservatism 101
Acknowledgments: I Thank Therefore I Am
Index