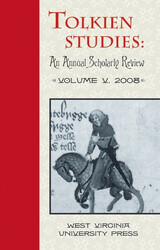 Tolkien Studies: An Annual Scholarly Review, Volume V
edited by Michael D.C. Drout, Douglas A Anderson and Verlyn Flieger
West Virginia University Press, 2008
eISBN: 978-1-938228-54-4
Tolkien Studies: An Annual Scholarly Review presents the growing body of critical commentary and scholarship on both J. R. R. Tolkien's voluminous fiction and his academic work in literary and linguistic fields.
AUTHOR BIOGRAPHY
Douglas A. Anderson is an independent scholar whose first book was The Annotated Hobbit (1988; revised enlarged 2002). He helped correct the text of The Lord of the Rings in both the American and British editions, and these versions contain his introductory “Note on the Text.” He is also the lesser co-author (with Wayne G. Hammond) of J.R.R. Tolkien: A Descriptive Bibliography (1993).  He has edited is a reissue of E. A. Wyke-Smith’s The Marvellous Land of Snergs (1996), a children’s book originally published in 1927 that provided the impetus of Tolkien’s children’s book The Hobbit. His anthologies include Tales Before Tolkien (2003), H. P. Lovecraft’s Favorite Weird Tales (2005), and Tales Before Narnia (2008). With Verlyn Flieger, he co-edited Tolkien On Fairy-stories (2008).
Michael D. C. Drout is the Prentice Professor and Chair of English at Wheaton College, Massachusetts, specializing in Anglo-Saxon and medieval literature, science fiction, and fantasy, especially the works of J. R. R. Tolkien and Ursula K. Le Guin. He is best known for his studies of Tolkien's scholarly work on Beowulf and the precursors and textual evolution of the essay Beowulf: the Monsters and the Critics, published as Beowulf and the Critics by J. R. R. Tolkien (2002), which won the Mythopoeic Award for Scholarship in Inklings Studies, 2003.

Verlyn Flieger is Emeritus Professor of English at the University of Maryland, where she specialized in Mythology and Folklore. Among her publications are A Question of Time: J. R. R. Tolkien’s Road to Faerie (1997), Splintered Light, Logos, and Language in Tolkien’s World (2002), and Interrupted Music: The Making of Tolkien’s Mythology (2005). With Douglas A. Anderson she edited Tolkien’s On Fairy-stories (2008).


•Brian Rosebury:Revenge and Moral Judgement in Tolkien
•Douglas A. Anderson:Rosebury on Tolkien: A Checklist
•Carl Phelpstead:"With chunks of poetry in between": The Lord of the Rings and Saga Poetics
•Corey Olsen:The Myth of the Ent and the Entwife
•James G. Davis:Showing Saruman as Faber: Tolkien and Peter Jackson
•Lynn Forest-Hill:Boromir, Byrhtnoth, and Bayard: Finding a Language for Grief in J.R.R. Tolkien's The Lord of the Rings
•Jason Fisher:Three Rings For Whom Exactly? Justifying the Disposition of the Three Elven Rings
•J.R.R. Tolkien:Chaucer as a Philologist: The Reeve's Tale
•J.R.R. Tolkien:The Reeve's Tale
•Ross Smith:Steiner on Tolkien
•George Steiner, trans. Ross Smith:Tolkien, Oxford's Eccentric Don
•Book Reviews, compiled by Douglas A. Anderson
•Michael D.C. Drout, Jason Rea, Rebecca Epstein, and Lauren Provost: Bibliography (in English) for 2006