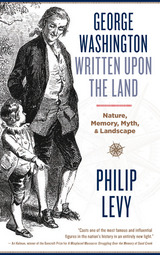 George Washington’s childhood is famously the most elusive part of his life story. For centuries biographers have struggled with a lack of period documentation and an absence of late-in-life reflection in trying to imagine Washington’s formative years.

In George Washington Written upon the Land, Philip Levy explores this most famous of American childhoods through its relationship to the Virginia farm where much of it took place. Using approaches from biography, archaeology, folklore, and studies of landscape and material culture, Levy focuses on how different ideas about Washington’s childhood functioned—what sorts of lessons they sought to teach and how different epochs and writers understood the man and the past itself.

In a suggestive and far-reaching final chapter, Levy argues that Washington was present at the onset of the Anthropocene—the geologic era when human activity began to have a significant impact on world ecosystems. Interpreting Washington’s childhood farm through the lens of “big” history, he encourages scholars to break down boundaries between science and social science and between human and nonhuman.

Philip Levy is professor of history at the University of South Florida and was part of the team that discovered and excavated George Washington’s boyhood home, a project that made national news in 2008. He is the author of Where the Cherry Tree Grew: The Story of Ferry Farm, George Washington’s Boyhood Home and Fellow Travelers: Indians and Europeans Contesting the Early American Trail.

"In this beautifully written and deeply researched book, Philip Levy reveals connections that have eluded generations of scholars. Which is to say, George Washington Written upon the Land accomplishes the impossible: it casts one of the most famous and influential figures in the nation's history in an entirely new light. Readers will be delighted and surprised in equal measure by this extraordinary work."
Ari Kelman, winner of the Bancroft Prize for A Misplaced Massacre: Struggling Over the Memory of Sand Creek


"This book is a paradigm shifter for those of us involved not only with the study of American memory but for the larger subfield of cultural history."
Gretchen A. Adams, author of The Specter of Salem: Remembering the Witch Trials in Nineteenth-Century America

TABLE OF CONTENTS
CONTENTS
Acknowledgments
“The Most Storied Ground in America”: An Introduction
1. “Somewhere This Had Beginnings”: Unspooling Washington’s Childhood Biography
2. Completing the Circuit of Memory: Washington and His Parting Survey
3. The Subterranean Young Washington: Crafting a Material Narrative for the Childhood Years
4. Fruits of Morality and Fruits of the Market: Weems’s Idyll at the Crossroads of War and Markets
5. “The Local Appellation Based on Tradition Only”: Making History from Promotion at George Washington’s Surveying Office
6. To Change the World: Young George and Ferry Farm in the Era of Human-Induced Climate Change
Notes
Index