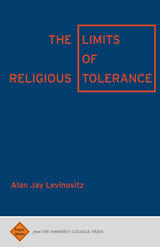 Religion’s place in American public life has never been fixed. As new communities have arrived, as old traditions have fractured and reformed, as cultural norms have been shaped by shifting economic structures and the advance of science, and as new faith traditions have expanded the range of religious confessions within America’s religious landscape, the claims posited by religious faiths—and the respect such claims may demand—have been subjects of near-constant change. In The Limits of Religious Tolerance, Alan Jay Levinovitz pushes against the widely held (and often unexamined) notion that unbounded tolerance must and should be accorded to claims forwarded on the basis of religious belief in a society increasingly characterized by religious pluralism. Pressing at the distinction between tolerance and respect, Levinovitz seeks to offer a set of guideposts by which a democratic society could identify and observe a set of limits beyond which religiously grounded claims may legitimately be denied the expectation of unqualified non-interference.