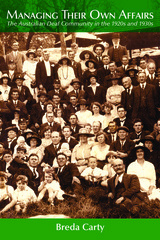 Managing Their Own Affairs explores how Deaf organizations and institutions were forged in Australia during the early 20th century. During this period, deaf people challenged the authority of the dominant welfare organizations, or Deaf Societies, which were largely controlled by hearing people and run as charitable institutions. Breda Carty comprehensively documents the growth of the Australian Deaf community and Australian Deaf organizations for the first time. She focuses on both the political developments of the early 20th century and on the nature of the relationships between deaf and hearing people.
During this time, deaf Australians aspired to manage their own affairs. They enjoyed some success by establishing “breakaways” from the Deaf Societies, and they also established an independent national organization, which was contested and ultimately suppressed by the Deaf Societies. These developments were influenced by wider social movements in Australian society, such as the mobilization of minority groups in their push for autonomy and equal rights. Although most of the breakaway Deaf organizations did not survive beyond the 1930s, they significantly affected the power structures and relationships between deaf and hearing people in Australia. The Australian Deaf community’s attempts to organize independently during these years have been largely erased from collective memory, making Carty’s examination a particularly important and necessary addition to the historical literature.
AUTHOR BIOGRAPHY
Breda Carty is a lecturer in Special Education at RIDBC Renwick Centre (affiliated with Macquarie University) in Sydney, Australia.
REVIEWS
"This is a highly illuminating study which will be of value to historians interested in the development of the Deaf community both in Australia and internationally. The vivid narration and careful attention to detail is absorbing...Managing Their Own Affairs represents a useful contribution to a field of Deaf history too commonly dominated by studies of Britain and the USA."
— H-Net Reviews in the Humanities and Social Sciences

"Carty's book is both a testament to the political will and collective agency of earlier generations of deaf people and a reminder of how a charity model recurs today in the lives of deaf people and some organizations professing to serve them."
— Disability & Society

TABLE OF CONTENTS
Cover
Title page
Copyright page
Contents
Acknowledgments
List of Abbreviations
Note on Terminology
Chapter 1: Introduction
Chapter 2: Things as We Deaf See Them
Chapter 3: The Prerogative of Every Citizen
Chapter 4: An Open and Official Breakaway
Chapter 5: The More We Are Together
Chapter 6: Managing Their Own Affairs: The National Scene
Chapter 7: All to No Purpose
Chapter 8: Epilogue
Notes
Bibliography
Index