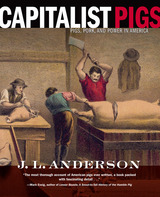 Pigs are everywhere in United States history. They cleared frontiers and built cities (notably Cincinnati, once known as Porkopolis), served as an early form of welfare, and were at the center of two nineteenth-century “pig wars.” American pork fed the hemisphere; lard literally greased the wheels of capitalism.

J. L. Anderson has written an ambitious history of pigs and pig products from the Columbian exchange to the present, emphasizing critical stories of production, consumption, and waste in American history. He examines different cultural assumptions about pigs to provide a window into the nation’s regional, racial, and class fault lines, and maps where pigs are (and are not) to reveal a deep history of the American landscape. A contribution to American history, food studies, agricultural history, and animal studies, Capitalist Pigs is an accessible, deeply researched, and often surprising portrait of one of the planet’s most consequential interspecies relationships.

J. L. Anderson teaches history at Mount Royal University in Calgary, Alberta. Prior to his academic appointment, he was a museum educator and administrator, cultivating a personal and professional interest in swine at the agricultural museums where he worked. Anderson is currently president of the Agricultural History Society.

2. Hogs at Home on the Range

4. Pigs and the Urban Slop Bucket

8. Science and the Swineherd

Coda: The Future of Hogs in America