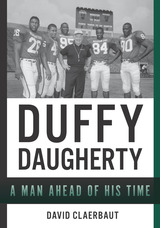 BUY FROM
Duffy Daugherty: A Man Ahead of His Time
by David Claerbaut
Michigan State University Press, 2018
Paper: 978-1-948314-00-8
eISBN: 978-1-948314-01-5
This is the story of Duffy Daugherty—humorist, trailblazer, raconteur, and Hall of Fame football coach—arguably the most famous figure in the storied history of Michigan State University football. Daugherty’s nineteen-year tenure at MSU was marked by great success. Between 1955 and 1966, eight Spartan teams finished in the Associated Press top ten college football teams. Daugherty was a character. With his zany wit putting him in demand as a public speaker, Daugherty became so well known for his winning teams and quotable comments that he adorned the cover of the October 8, 1956, issue of Time magazine. Daugherty was a major figure in bringing African American athletes into the mainstream of college sports. From his arrival at MSU, he worked to field integrated teams. His undefeated 1966 powerhouse squad—one that played Notre Dame to an unforgettable 10–10 tie in the season finale—included four black players selected among the first eight players taken in the NFL draft. MSU memorialized Daugherty by naming the football team’s practice facility the Duffy Daugherty Football Building in his honor.
AUTHOR BIOGRAPHY
DAVID CLAERBAUT is a championship coach, nationally known business consultant, and motivational speaker. He is a Master Methodologist at Grand Canyon University and previously was Chair of the Sociology/ Anthropology Department at North Park University in Chicago, where he also served as Athletic Director.
TABLE OF CONTENTS
Contents
Foreword by Steve Juday
Acknowledgments
1. Duffy
2. The Road to East Lansing
3. Loser
4. Pasadena Bound
5. Celebrity
6. Almost
7. Off the Radar Screen
8. A Small Step Back
9. Ups and Downs
10. Settled In
11. Right Here at Michigan State
12. At the Summit
13. Kissing Your Sister
14. The Year After
15. Green, White, and Black
16. Surviving
17. The Beginning of the End
18. Frustration
19. The Final Season
20. Life after Coaching
Index
REQUEST ACCESSIBLE FILE