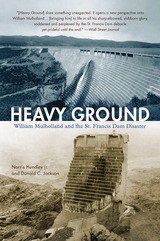 Employing copious illustrations and intensive research, Heavy Ground traces the interwoven roles of politics and engineering in explaining how the St. Francis Dam came to be built and the reasons for its collapse. Hundley and Jackson also detail the terror and heartbreak brought by the flood, legal claims against the City of Los Angeles, efforts to restore the Santa Clara Valley, political factors influencing investigations of the failure, and the effect of the disaster on congressional approval of the future Hoover Dam. Underlying it all is a consideration of how the dam—and the disaster—were inextricably intertwined with the life and career of William Mulholland. Ultimately, this thoughtful and nuanced account of the dam’s failure reveals how individual and bureaucratic conceit fed Los Angeles’s desire to control vital water supplies in the booming metropolis of Southern California.
AUTHOR BIOGRAPHY
Norris Hundley (1935–2013) was an author and leader in the history of the American West and in the nascent field of water history. He was a was long time member of the History Department at UCLA and served as president of both the Western History Association and the Pacific Coast Branch of the American Historical Association.

Donald C. Jackson is the Cornelia F. Hugel Professor of History at Lafayette College in Easton, Pennsylvania. He has authored many books and articles on the history of dams and hydraulic engineering.

Appendix A: How Fast Could the Reservoir Have Been Lowered? 337
Appendix B: Was Failure Inevitable? 341

Acknowledgments 345
About the Authors 346