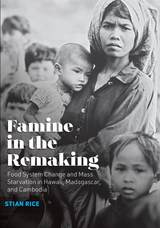 Mass starvation’s causes may seem simple and immediate: crop failure, poverty, outbreaks of violence, and poor governance. But famines are complex, and scholars cannot fully understand what causes them unless they look at their numerous social and environmental precursors over long arcs of history and over long distances.
Famine in the Remaking examines the relationship between the reorganization of food systems and large-scale food crises through a comparative historical analysis of three famines: Hawaii in the 1820s, Madagascar in the 1920s, and Cambodia in the 1970s. This examination identifies the structural transformations—that is, changes to the relationships between producers and consumers—that make food systems more vulnerable to failure. Moving beyond the economic and political explanations for food crisis that have dominated the literature, Stian Rice emphasizes important socioecological interactions, developing a framework for crisis evolution that identifies two distinct temporal phases and five different types of causal mechanisms involved in food system failure. His framework contributes to current work in famine prevention and, animated by a commitment to social justice, offers the potential for early intervention in emerging food crises.
AUTHOR BIOGRAPHY
Stian Rice is a food systems geographer whose research examines the slow-moving social and environmental changes to agricultural production and food consumption. He received a doctorate in geography from Kent State University and is currently with the Center for Urban Environmental Research and Education at the University of Maryland, Baltimore County.
TABLE OF CONTENTS