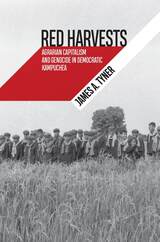 Reassessing the Cambodian genocide through the lens of global capitalist development.

James Tyner reinterprets the place of agriculture under the Khmer Rouge, positioning it in new ways relative to Marxism, capitalism, and genocide. The Cambodian revolutionaries’ agricultural management is widely viewed by critics as irrational and dangerous, and it is invoked as part of wider efforts to discredit leftist movements. Researching the specific functioning of Cambodia’s transition from farms to agriculture within the context of the global economy, Tyner comes to a different conclusion. He finds that analysis of “actually existing political economy”—as opposed to the Marxist identification the Khmer Rouge claimed—points to overlap between Cambodian practice and agrarian capitalism.

Tyner argues that dissolution of the traditional Khmer family farm under the aegis of state capitalism is central to any understanding of the mass violence unleashed by the Khmer Rouge. Seen less as a radical outlier than as part of a global shift in farming and food politics, the Cambodian tragedy imparts new lessons to our understanding of the political economy of genocide.

James A. Tyner is a professor of geography at Kent State University and a fellow of the American Association of Geographers. He is the author of numerous books, including War, Violence, and Population: Making the Body Count, which received the AAG Meridian Book Award for Outstanding Scholarly Work in Geography, and The Politics of Lists: Bureaucracy and Genocide under the Khmer Rouge (WVU Press).

1. “Revolution Is the People’s War”
2. “Be Masters of Your Own Destiny!”
3. “We Are Building Socialism in the Cooperatives”
4. “Currency Is a Most Poisonous Tool”