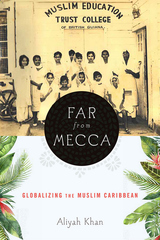 Far from Mecca: Globalizing the Muslim Caribbean is the first academic work on Muslims in the English-speaking Caribbean. Khan focuses on the fiction, poetry, and music of Islam in Guyana, Trinidad, and Jamaica. Combining archival research, ethnography, and literary analysis, Khan argues for a historical continuity of Afro- and Indo-Muslim presence and cultural production in the Caribbean. Case studies explored range from Arabic-language autobiographical and religious texts written by enslaved Sufi West Africans in nineteenth-century Jamaica, to early twentieth-century fictions of post-indenture South Asian Muslim indigeneity and El Dorado, to the attempted government coup in 1990 by the Jamaat al-Muslimeen in Trinidad, as well as the island’s calypso music, to contemporary judicial cases concerning Caribbean Muslims and global terrorism. Khan argues that the Caribbean Muslim subject, the “fullaman,” a performative identity that relies on gendering and racializing Islam, troubles discourses of creolization that are fundamental to postcolonial nationalisms in the Caribbean.
AUTHOR BIOGRAPHY
Aliyah Khan is an assistant professor of English and Afroamerican and African studies at the University of Michigan, Ann Arbor.

REVIEWS
"In Far From Mecca, Aliyah Khan argues that Muslim identity is neither fixed nor uniform, but is instead performative, expressed according to shifting and contingent boundaries that are responses to historical and cultural, and local and global currents. Well-written and clearly argued, this book is a welcome addition to the growing literature on the diversity of Muslims’ histories and representation both in the Caribbean and across the globe."
— Aisha Khan, author of Islam and the Americas