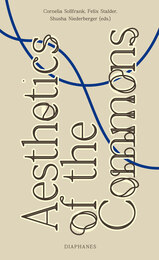 What do a feminist server, an art space located in a public park in North London, a so-called pirate library of high cultural value yet dubious legal status, and an art school that emphasizes collectivity have in common? They all demonstrate that art plays an important role in imagining and producing a real quite different from what is currently hegemonic, and that art has the possibility to not only envision or proclaim ideas in theory, but also to realize them materially.

Aesthetics of the Commons examines a series of artistic and cultural projects—drawn from what can loosely be called the (post)digital—that take up this challenge in different ways. What unites them, however, is that they all have a double character. They are art in the sense that they place themselves in relation to (Western) cultural and art systems, developing discursive and aesthetic positions, but, at the same time, they are operational in that they create recursive environments and freely available resources whose uses exceed these systems. The first aspect raises questions about the kind of aesthetics that are being embodied, the second creates a relation to the larger concept of the commons. In Aesthetics of the Commons, the commons are understood not as a fixed set of principles that need to be adhered to in order to fit a definition, but instead as a thinking tool—in other words, the book’s interest lies in what can be made visible by applying the framework of the commons as a heuristic device.

AUTHOR BIOGRAPHY
Felix Stalder is professor of digital culture in the Department Fine Arts at Zurich University of the Arts and principal investigator for the “Creating Commons” research project. He not only works as an academic, but also as a cultural producer, being a moderator of the mailing list <nettime> and a member of the World Information Institute as well as the Technopolitics Working Group, both in Vienna. Among his recent publications are Digital Solidarity and The Digital Condition.Cornelia Sollfrank is an artist, researcher, and educator living in Berlin. She is currently a research associate at the Zurich University of the Arts for the “Creating Commons” project. She was cofounder of the collectives women-and-technology, -Innen, Old Boys Network, and #purplenoise. She is the author of The Beautiful Warriors. Technofeminist Praxis in the Twenty-First Century. Shusha Niederberger is an artist and educator who has been active in the field of media art, autonomous technological practice, and education. Since 2014, she is directing the art education department of HeK (House of electronic arts Basel). She is also a lecturer for contemporary net cultures at F+F Schule für Kunst und Gestaltung Zürich, and currently is research associate at the University of the Arts in Zürich for the project ‘Creating Commons.’
TABLE OF CONTENTS

The Commons, The Public, and the Aesthetics of Solidarity
Jeremy Gilbert

Which “Aesthetics of the Commons”?
Judith Siegmund


Care & Infrastructure
Commoning the Commons: Revisiting the Role of Art in Times of Crisis
Daphne Dragona

In search of common forms and curatorial epistemologies. On the exhibition OPEN SCORES: How to program the commons
Magdalena Tyzlik-Carver

What is “In Common” Here? Transformed Relationships Between Art and Education on the path to (Digital) Commons
Rahel Puffert


Description of the main projects