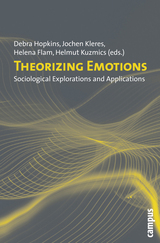 Theorizing Emotions reflects the recent turn to emotions in academia—not just in sociology but also in psychology, evolutionary biology, and neuroscience. Drawing on the classic studies of Max Weber, Erving Goffman, and Norbert Elias, several leading European scholars present their findings on the role of emotions in various facets of society, from the laboratory to the office to the media. Among the topics discussed are the tensions between feelings and feeling rules, the conscious and unconscious emotions of scientists, emotions and social disorder, the effect of the emotional turn as an element of advancing modernity, romantic love in U.S. and Israeli codes of conduct, and the role of mass media in generating massive public emotions.