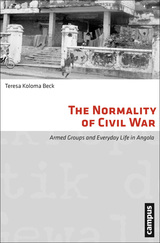 BUY
The Normality of Civil War: Armed Groups and Everyday Life in Angola
by Teresa Koloma Beck
Campus Verlag, 2012
Paper: 978-3-593-39756-6
In The Normality of Civil War, Teresa Koloma Beck uses theories of the everyday to analyze the social processes of civil war, specifically the type of conflict that is characterized by the expansion of violence into so-called normal life. She looks beyond simplistic notions of victims and perpetrators to reveal the complex shifting interdependencies that emerge during wartime. She also explores  how the process of normalization affects both armed groups and the civilian population. A brief but smart analysis, The Normality of Civil War gets at the root of the social dynamics of war and what lies ahead for the participants after its end.

AUTHOR BIOGRAPHY
Teresa Koloma Beck is a fellow of international conflict management at the Willy Brandt School of Public Policy at Erfurt University.