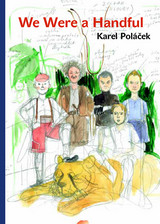 A favorite work of Czech humor, We Were a Handful depicts the adventures of five boys from a small Czech town through the diary of Petr Bajza, the grocer’s son. Written by Karel Poláček at the height of World War II before his deportation to Auschwitz in 1944, this book draws on the happier years of Poláček’s own childhood as inspiration. As we look upon the world through Petr’s eyes, we, too, marvel at the incomprehensible world of grownups; join in fights between gangs of neighborhood kids; and laugh at the charming language of boys, a major source of the book’s humor. This translation at last offers English-language readers the opportunity to share in Petr’s (and Poláček’s) childhood and reminds us that joy and laughter are possible even in the darkest times.

AUTHOR BIOGRAPHY
Karel Poláček (1892–1944) was a Czech novelist and journalist. Of Jewish descent, he was transported to several concentration camps during World War II before dying at Gleiwitz. Mark Corner is a translator, author, and lecturer in religious and European studies who lives and works in Brussels.
TABLE OF CONTENTS


We Were a Handful
Translator's Note and Acknowledgement