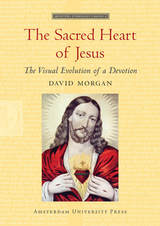 From its origins in the mid-seventeenth century visions of the French nun Margaret Mary Alacoque (1647–90) to its continuing employment in worship today, the Devotion to the Sacred Heart of Jesus has been controversial. Vigorously promoted by Jesuit spiritual directors, embroiled in the controversies of Jansenist writers, closely associated with Royalist political causes in France, and taken around the world by Sister Sophie Barat in the nineteenth century, the Devotion’s practices took on the shape of its evolving visual culture and iconography. This volume traces the unfolding visual biography of the sacred heart and shows how imagery documents the Devotion’s remarkable evolution.

David Morgan is professor of religion at Duke University.