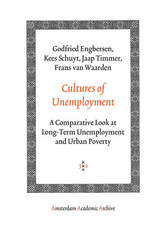 BUY
Cultures of Unemployment: A Comparative Look at Long-Term Unemployment and Urban Poverty
by Godfried Engbersen, Kees Schuyt, Jaap Timmer and Frans van Waarden
Amsterdam University Press, 2006
eISBN: 978-90-485-0402-2
Paper: 978-90-5356-846-0
In the 1980s a team of Dutch sociologists conducted a study on the daily life of unemployed in the Netherlands. They were inspired by the classical work Marienthal: the Sociology of an Unemployed Community first published in 1933. The authors conducted three neighborhood studies to analyze the social behavior of the unemployed. Based on the work of Robert K. Merton and Mary Douglas they developed a typology of different cultures of unemployment. This typology is still relevant to analyze contemporary reactions to unemployment in European welfare states. The authors also demonstrated that their cultural analysis is fruitful to understand the heterogeneity of urban marginality in the United States. A foreword by U.S. scholar William Julius Wilson emphasizes the universality of the method and the findings presented here.

AUTHOR BIOGRAPHY
Godfried Engbersen is professor of sociology at the Erasmus University Rotterdam. Kees Schuyt is professor of sociology at the University of Amsterdam and member of the Council of State. Jaap Timmer is associate professor of police and safety studies at the Free University of Amsterdam. Frans van Waarden is professor of policy and organization at the University of Utrecht.
REVIEWS
“(The authors) brilliantly position the problems of increasing joblessness and poverty in the Netherlands within the international and American debates on urban poverty and welfare state regimes…Cultures of Unemployment is the most significant study to date on the new poverty in Europe and its consequences for the future.”
William Julius Wilson, from the Foreword
“…an extraordinarily rich and detailed study of the social and economic life of unemployed and poor households.” Michael Sherraden in Social Work
TABLE OF CONTENTS