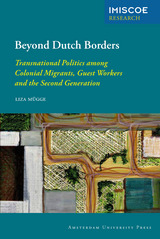 Migrants often remain loyal to their former homelands and stay active in the politics there— despite widespread criticism of these ties in their host countries. Combining extensive fieldwork with quantitative data, Beyond Dutch Borders compares how transnational political involvement among guest workers from Turkey and postcolonial migrants from Surinam living in the Netherlands has evolved during the past fifty years. The author explores the dynamics and influence of such dual affiliations and finds that migrants’ border-crossing loyalties and engagement actually heighten their political integration into their host countries.

Liza Mügge is assistant professor of political science at the University of Amsterdam.