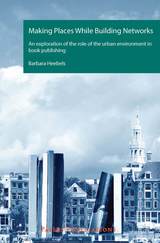 BUY
Making Places While Building Networks. An exploration of the role of the urban environment in book publishing
by Barbara Heebels
Amsterdam University Press, 2012
Paper: 978-90-8555-072-3
eISBN: 978-90-485-1786-2
The Amsterdam ring of canals is a much beloved location for Dutch book publishers. An exposition of the meaning of this urban environment for publishers adds to the existing knowledge on book publishers and their business locations. It also contributes to our understanding of the role of urban place in cultural production by looking at cultural production from a relatively unexplored angle ­ that of the cultural intermediary ­ and by conceptualizing place as a dynamic concept.
Publishers function as cultural intermediaries by bringing together the creation of cultural value and the selling of cultural products. An exploration of the meaning of urban place for cultural intermediaries in building reputation and trust in their personal networks with authors, booksellers, colleagues and the press, shows that place is more than geographical proximity and is not a static condition for knowledge spill-overs: it is a process, one that is interdependent on social networks.
TABLE OF CONTENTS
MAKING PLACES WHILEBUILDING NETWORKS An Exploration Of The Role Of The Urban Environment In Book Publishing
Table of contents
1. Introduction
2. Creative clusters in Berlin: entrepreneurship and the quality of place in Prenzlauer Berg and Kreuzberg
3. Performing in Dutch book publishing 1880–2008: the importance of entrepreneurial experience and the Amsterdam cluster
4. Place-making from publishing house to book fair: Dutch book publishers and the role of place in establishing trust and reputation
5. Social networks and cultural intermediaries: the multiplexity of personal ties in publishing
6. Conclusions
References
Nederlandse samenvatting