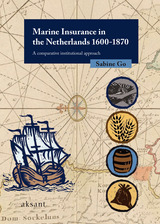 Marine insurance has been of great importance to the expansion of long distance trade and economic growth in the early modern period, in particular for seafaring nations such as the Dutch Republic. The Amsterdam market became Europes leading insurance market and within the Republic other insurance systems also emerged. Little is known about the differing institutional frameworks governing these industries and the interaction between the institutions and the actors in the industry.

This study will examine the development of marine insurance in the Netherlands in Amsterdam, Rotterdam and the province of Groningen from c. 1600 to 1870 from an institutional point of view. It will examine how the behaviour of authorities, insurers, underwriters and brokers was affected by the formal and informal constraints of the industry and how in turn their conduct has influenced the institutional framework and induced institutional change.

A comparative institutional analysis will be made of three insurance systems in the Netherlands, each with its own distinctive characteristics. The interaction between institutions and actors will be studied in relation to the effects of technological innovations and international geo-political changes. By examining developments over a period of two and half centuries the path of long-term institutional change becomes discernable.

AUTHOR BIOGRAPHY
Sabine Go holds a MSc in financial economics. She obtained her PhD at VU University Amsterdam where she currently works as researcher.
TABLE OF CONTENTS


Lists of tables, graphs and maps
List of abbreviations
Acknowledgements