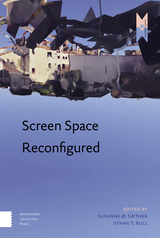 BUY
Screen Space Reconfigured
edited by Synne Tollerud Bull and Susanne Saether
Amsterdam University Press, 2020
eISBN: 978-90-485-2905-6
Screen Space Reconfigured is the first edited volume that critically and theoretically examines the many novel renderings of space brought to us by 21st century screens. Exploring key cases such as post-perspectival space, 3D, vertical framing, haptics, and layering, this volume takes stock of emerging forms of screen space and spatialities as they move from the margins to the centre of contemporary media practice.Recent years have seen a marked scholarly interest in spatial dimensions and conceptions of moving image culture, with some theorists claiming that a 'spatial turn' has taken place in media studies and screen practices alike. Yet this is the first book-length study dedicated to on-screen spatiality as such.Spanning mainstream cinema, experimental film, video art, mobile screens, and stadium entertainment, the volume includes contributions from such acclaimed authors as Giuliana Bruno and Tom Gunning as well as a younger generation of scholars.
AUTHOR BIOGRAPHY
A scholar and curator of contemporary camera-based art, Susanne Østby Sæther is currently Curator of Photography and New Media Art at Henie Onstad Art Center, Norway. Sæther has been a Postdoctoral Fellow at the Internationales Kolleg für Kulturtechnikforschung und Medienphilosophie (IKKM) at the Bauhaus-Universität, Weimar. She holds a PhD in media studies on video art and is a Helena Rubenstein Curatorial alumnus from the Whitney Independent Study Program, New York. Her publications include topics such as the new haptics of 21st century video art, the aesthetics of sampling in video art, and the institutional-economic conditions of moving image art production and exhibition in Norway.Synne Tollerud Bull is a visual artist working with Dragan Miletic as Bull.Miletic. Since 2000, they exhibited internationally and their work has been included in numerous private and public collections. Bull initiated and curated several exhibitions, symposia and events, and is the co-editor of Urban Images: Unruly Desires in Film and Architecture, (Sternberg Press, 2011). Bull is a former Professor of Contemporary Art at Academy of Fine Arts, Oslo National Academy of the Arts. Currently, she is a PhD research fellow in Media Aesthetics at the Department of Media and Communication.
TABLE OF CONTENTS