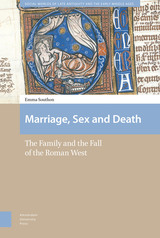 By the end of the fifth century, with the structural collapse of the Roman Empire in the west, Western Europe had fallen into the so-called Dark Ages. With the power of Rome removed, the Catholic Church stepped in to fill the void. Its political rise, alongside that of the Germanic kingdoms, led to dramatic changes in law, politics, power, and culture. Against the backdrop of that upheaval, the family became a vitally important area of focus for cultural struggles related to morality, law, and tradition. This book explores those battles in order to demonstrate, through the family, the intersections between Roman and Christian legal culture, thought, and political power.
AUTHOR BIOGRAPHY
Dr Emma Southon lives in Belfast and is a freelance writer and editor.
TABLE OF CONTENTS