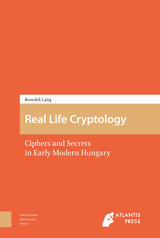 BUY
Real Life Cryptology: Ciphers and Secrets in Early Modern Hungary
by Benedek Láng
Amsterdam University Press, 2018
eISBN: 978-90-485-3669-6
Cloth: 978-94-6298-554-4
A large number of enciphered documents survived from early modern Hungary. This area was a particularly fertile territory where cryptographic methods proliferated, because a large portion of the population was living in the frontier zone, and participated (or was forced to participate) in the network of the information flow. A quantitative analysis of sixteenth-century to seventeenth-century Hungarian ciphers (300 cipher keys and 1,600 partly or entirely enciphered letters) reveals that besides the dominance of diplomatic use of cryptography, there were many examples of ŸprivateŒ applications too. This book reconstructs the main reasons and goals why historical actors chose to use ciphers in a diplomatic letter, a military order, a diary or a private letter, what they decided to encrypt, and how they perceived the dangers threatening their messages.
AUTHOR BIOGRAPHY
A historian of science, Benedek Láng is a professor at the Budapest University of Technology and Economics. He specializes in late medieval manuscripts of learned magic and early modern secret communication (artificial languages and cipher systems).
TABLE OF CONTENTS


AbbreviationsNote on terminologyNote on names1. Introduction2. Uncovered fields in the research literature2.1. Neglected secret writings in secrecy studies2.2. Secrecy in the history of science2.3. The need for social history in cryptography studies2.4. Cryptography in Hungary3. Secret writings and attitudes - research questions4. Theory and practice of cryptography in early modern Europe 4.1 Vulnerable ciphers: the monoalphabetic way4.2. An Arabic contribution: the cryptanalysis4.3. New methods in the literature: the polyalphabetic cipher4.4. Practice in diplomacy: the homophonic cipher5. Ciphers in Hungary: the source material5.1. Frameworks of data collection5.2. General description of the sources5.3. Cipher keys5.3.1 The structure of the tables5.3.2. Letters of the alphabet5.3.3. Nomenclatures5.3.4. Nullities5.3.5. Grammatical elements5.4. Ciphered letters6. Ciphers in action6.1. Sharing the key6.2. Replacing the cipher keys6.3. The tiresome work of enciphering6.4. The cryptologist6.5. Cautious and reckless encryption6.6. Sand in the machine6.7. Breaking the code6.8. Advanced or outdated?7. Ways of knowledge transfer7.1. Handbooks of cryptography7.2. Artificial languages7.3. Stenography7.4. The Turkish factor7.5. Distance from diplomacy8. Scenes of secrecy8.1. Dissimulation and the secret8.2. Communication in politics8.3. Military operations and espionage8.4. Love, politics and male bonding8.5. Family secrets and privacy: ladies and ciphers8.6. Private sins-public morals: secrets of a diary and shame8.7. Science, chemistry and alchemy8.8. Secret characters and magic8.9. Encrypting in religion9. Summary10. Appendix10.1 List of cipher tables from early modern Hungary 10.2 List of ciphertexts from early modern HungaryAcknowledgementsEarlier publicationsBibliographyINDEX