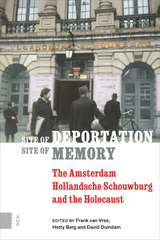 BUY
Site of Deportation, Site of Memory: The Amsterdam Hollandsche Schouwburg and the Holocaust
edited by Frank van Vree, Hetty Berg and David Duindam
Amsterdam University Press, 2017
Cloth: 978-94-6298-557-5
eISBN: 978-90-485-3672-6
The Hollandsche Schouwburg is a former theatre in Amsterdam where, during the Nazi occupation of the Netherlands, tens of thousands of Jews were assembled before being deported to transit and concentration camps. Before the war, the theatre had been an example of Jewish integration in the Netherlands, and after the war it became a memorial for the Jewish victims of Nazi persecution. This book is the first international publication to address all the historical aspects of the site, putting it in a broader European and historical context.
AUTHOR BIOGRAPHY
Frank van Vree is an historian and professor of journalism at the Universiteit van Amsterdam.Hetty Berg is chief curator and manager of museum affairs of the Jewish Cultural Quarter, Amsterdam.David Duindam is researcher and lecturer at the University of Amsterdam.
TABLE OF CONTENTS


Introduction Frank van VreeTimeline Chapter 1. In and around the theatre. Jewish life in Amsterdam in the pre-war era. Frank van Vree, Hetty Berg and Joost GroeneboerChapter 2. In the Shadow of Nazism. Theatre and Culture on the Eve of Deportation. Esther GöbelChapter 3 Site of Terror. Persecution and Deportation Annemiek GringoldChapter 4 Site of Memory, Site of Mourning David DuindamEpilogue