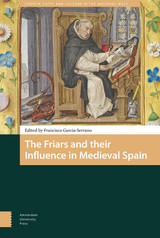 The mendicant friars, especially the Dominicans and the Franciscans, made an enormous impact in thirteenth-century Spain influencing almost every aspect of society. In a revolutionary break from the Church’s past, these religious orders were deeply involved in earthly matters while preaching the Gospel to the laity and producing many of the greatest scholars of the time. Furthermore, the friars reshaped the hierarchy of the Church, often taking up significant positions in the episcopate. They were prominent in the establishment of the Inquisition in Aragon and at the same time they played a major part in interfaith relations between Jews, Muslims and Christians. In addition, they were key contributors in the transformation of urban life, becoming an essential part of the fabric of late medieval cities, while influencing policies of monarchs such as James I of Aragon and Ferdinand III of Castile.Their missions in the towns and their educational role, as well as their robust associations with the papacy and the crown, often raised criticism and lead to internal tensions and conflict with other clergymen and secular society. They were to be both widely admired and the subjects of biting literary satire.As this collection demonstrates, the story of medieval Spain cannot possibly be fully told without mention of the critical role of the friars.
AUTHOR BIOGRAPHY
Francisco García-Serrano is Professor of Medieval History at Saint Louis University, Madrid Campus. He has published extensively examining the importance of the mendicant orders in medieval Spain.
TABLE OF CONTENTS