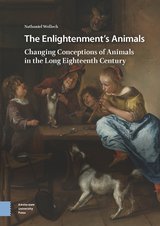 BUY
The Enlightenment's Animals: Changing Conceptions of Animals in the Long Eighteenth Century
by Nathaniel Wolloch
Amsterdam University Press, 2019
eISBN: 978-90-485-3932-1
In The Enlightenment’s Animals Nathaniel Wolloch takes a broad view of changing conceptions of animals in European culture during the long eighteenth century. Combining discussions of intellectual history, the history of science, the history of historiography, the history of economic thought, and, not least, art history, this book describes how animals were discussed and conceived in different intellectual and artistic contexts underwent a dramatic shift during this period. While in the seventeenth century and the first half of the eighteenth century the main focus was on the sensory and cognitive characteristics of animals, during the late Enlightenment a new outlook emerged, emphasizing their conception as economic resources. Focusing particularly on seventeenth-century Dutch culture, and on the Scottish Enlightenment, Wolloch discusses developments in other countries as well, presenting a new look at a topic of increasing importance in modern scholarship.
AUTHOR BIOGRAPHY
Nathaniel Wolloch is an independent scholar from Israel.
TABLE OF CONTENTS


List of Illustrations Preface Introduction PART I ANIMAL EXPERIMENTATION1. Animal Experimentation and Ethics in the Early Modern Era 2. Christiaan Huygens and Animal Experimentation PART II FROM PHILOSOPHY TO HISTORIOGRAPHY IN THE ENLIGHTENMENT3. The Turkish Spy and Eighteenth-Century British Theriophily 4. Rousseau and Animals 5. William Smellie and the Enlightenment Critique of Anthropocentrism 6. John Gregory and Scottish Enlightenment Views of Animals 7. Buffon, Crèvecoeur, and the Limits of Enlightenment Sensitivity to Animal Suffering 8. Animals in Enlightenment Historical Literature PART III ART AND ECONOMICS9. Seventeenth-Century Netherlandish Paintings of Dead Animals and Changing Perceptions of Animals 10. Adam Smith and the Economic Consideration of Animals 11. From Symbols to Commodities: The Economization of Animals in the Transition to Modernity Bibliography