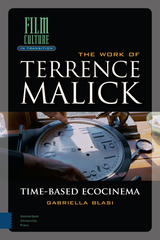 BUY
The Work of Terrence Malick: Time-Based Ecocinema
by Gabriella Blasi
Amsterdam University Press, 2020
eISBN: 978-90-485-4151-5
The Work of Terrence Malick: Time-Based Ecocinema develops a timely ecocinema approach to film analysis illuminated by Benjamin's notion of the turn of time. Current work on Malick's films emphasizes the spatial dynamics of his cinema, particularly as it pertains, from within a phenomenological framework, to the viewer's experience of films. This book redirects scholarly attention to the way Malick's directorial work shapes time and duration, laying new groundwork for the analysis of how films unsettle nature-culture binaries in modernity. The study performs this intervention through a rigorous engagement with Walter Benjamin's work on time, violence and technologies and the emergent figural approach to aesthetics in film studies. Each of these methods has important precedents in film studies and other fields. The combination of methods performed in this book contributes to understanding the relevance of a time-based approach to Malick's films and the practical implications of a time-based relation to history in contemporary ecocinema discourses.
AUTHOR BIOGRAPHY
[Gabriella Blasi](https://griffith.academia.edu/GabriellaBlasi) teaches and researches at Griffith University as Adjunct in the Centre for Social and Cultural Research. Her research and academic publications consistently focus on the complexities of nature-culture relations in contemporary culture and cinema.
TABLE OF CONTENTS


AcknowledgmentsIntroductionFraming Nature and History in Malick ScholarshipEcocritical Film Studies and the Problem of SpaceThe Figural Approach to Analysis in Film StudiesBenjamin's Concept of Time in Film StudiesTerrence Malick's Work: Time-Based Ecocinema1. From Myth, Tragedy and Narrative to Allegory, Trauerspiel and Film in Badlands and Days of HeavenSymbolic and Allegorical Nature in BadlandsTragedy and Trauerspiel in Days of HeavenPrehistory and Second Technologies in Badlands and Days of HeavenThe Blue Flower in the Land of Technology: Splinters of Messianic Time in Badlands and Days of HeavenConclusion: from Mythic to Figural Temporal Relations in Films2. Time and History in The Thin Red Line and The New WorldThe Thin Red Line Between Historical and Mechanical NatureCritiquing Violence in Nature and HistoryTimidity and Courage in The Thin Red Line and The New WorldCamera Work as Pure MedialityConclusion: Time-Based Phenomenology3. Looking at Evolutionary Narratives in The Tree of Life and Voyage of TimeReplaying Life's Tape? Competing Mythological Narratives in Malick's The Tree of Life and Voyage of TimeReconfiguring Modern Aesthetics in Evolutionary NarrativesFigural Space beyond Idealism and NihilismMaterialist Theology in The Tree of Life and Voyage of Time: Life's JourneyConclusion: Counterfactual Histories in Evolutionary Narratives4. The Wastelands of Progress in To the Wonder, Knight of Cups and Song to SongThe End of Teleological Time in To the WonderThe Pilgrim's Progress in Knight of CupsTwenty-First Century's Histories and Technologies in Song to SongContemporary Ecocinema in Song to SongConclusion: Finite Freedom and Materialist Theology in EcocinemaConclusionBibliographyIndex