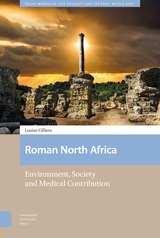 BUY
Roman North Africa: Environment, Society and Medical Contribution
by Louise Cilliers
Amsterdam University Press, 2019
eISBN: 978-90-485-4268-0
This book examines the environment and society of North Africa during the late Roman period (fourth and fifth centuries CE) through the writings of Helvius Vindicianus, Theodorus Priscianus, Caelius Aurelianus, and Cassius Felix.These four medical writers, whose translation into Latin of precious Greek texts has been hailed as ‘the achievement of the millennium’ by one modern scholar, provide a unique opportunity to understand North Africa, the most prosperous region of the Roman World during Late Antiquity. Although focusing on medical knowledge and hygiene, their writings provide fresh insights on the environment, economy, population, language, and health facilities of the region.Roman North Africa: Environment, Society and Medical Contribution includes the first full discussion of the exceptional career of the physician Helvius Vindicianus, as well as a valuable reassessment of other writers whose works were read throughout the Middle Ages. It will therefore prove invaluable not only for scholars of Late Antiquity and North Africa, but also for those working on later periods.
AUTHOR BIOGRAPHY
Louise Cilliers is currently Honorary Research Fellow (and formerly Professor of Classical Languages) at the University of the Free State in Bloemfontein, South Africa. For many years she served as the editor of the international journal Acta Classica. She has published numerous articles on ancient medicine, Late Antique North Africa, and related subjects.
TABLE OF CONTENTS


PrefaceChapter 1: History, environment, population and cultural lifeChapter 2: Health facilities in the cities of Roman North AfricaChapter 3: Greek, Roman and Christian views on the causes of infectious epidemic diseasesChapter 4: The knowledge and competence of physicians in the 4th/5th centuriesChapter 5: Vindicianus: physician, proconsul, mentorChapter 6: Theodorus Priscianus on drugs and therapiesChapter 7: More Latinizers: Cassius Felix, Caelius Aurelianus and MuscioChapter 8: Augustine on the medical scene in Roman North Africa in the late 4th and early 5th centuries CEChapter 9: Reciprocal influences: Greco-Roman and Christian views of healingChapter 10: The role of Roman North Africa in the preservation and transmission of medical knowledge