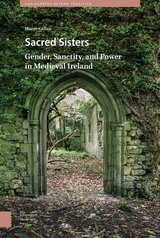 BUY
Sacred Sisters: Gender, Sanctity, and Power in Medieval Ireland
by Maeve Callan
Amsterdam University Press, 2020
eISBN: 978-90-485-4299-4
*Sacred Sisters* focuses on five saints: the four female Irish saints who have extant medieval biographies (Darerca, Brigid, Íte, and Samthann), and Patrick, whose writings -- fifth-century Ireland’s sole surviving texts -- attest to the centrality of women in Irish Christianity’s development. Women served as leaders and teachers, perhaps even as bishops and priests, and men and women worked together in a variety of arrangements as well as independently. Previous studies of gender in medieval Ireland have emphasized sexism and sex-segregated celibacy, dismissing abundant evidence of alternative approaches throughout the sources, including in the Lives of Ireland’s female saints. Sacred Sisters places these generally marginalized texts at its center, exploring their portraits of empowered, authoritative, compassionate women who exemplified an accepting and affirming ethics of gender and sexuality that would be unusual in many mainstream Christian movements in the present day, let alone in the Middle Ages.
AUTHOR BIOGRAPHY
[Maeve Callan](https://simpson.edu/about-simpson-college/faculty-and-staff/maeve-callan), Associate Professor of Religion and Women's and Gender Studies at Simpson College, received her Ph.D. in Religion from Northwestern University and her M.Phil. in Women's Studies from Trinity College Dublin. She is the author of *The Templars, the Witch, and the Wild Irish: Vengeance and Heresy in Medieval Ireland*.
TABLE OF CONTENTS


Introduction A Golden Age of Gender Relations? A Responsible Usable Past Book Overview Memories of the Future Ch 1. "Founded Upon the Rock Which is Christ": What Patrick and His Promoters Reveal about Women in the Early Irish Church Patrick in his own words Women in Patrician propaganda Syneisaktism Conclusion Ch 2. "A New and Apostolic Band of Virgins Arose": Darerca, an Exceptionally Learned Abbess Untangling the sources Doctissima abbatissa, an exceptionally learned abbess Community Gender dynamics Diversity within community Conclusion Ch. 3. "The Safest City of Refuge": Brigid the Bishop Many Lives, little certainty Brigid, the early years Consecration and ordination Double monasteries Meeting women's needs Secunda Brigida Conclusion Ch. 4. "God is always present with those who exemplify such devotion": Íte, Foster-Mother of the Saints of Ireland The path to the holy life Prophecy and patronage Asceticism Conclusion Ch. 5. "Do Not Harass My Sisters": Samthann, An Abbess Not To Be Crossed Urney Constructing Clonbroney Cáin Adomnáin (Adomnán's Law) The mercy of Samthann Female solidarity Wisdom The célí Dé Conclusion Ch. 6. "I place myself under the protection of the virgins all together": Sister saints with something like a Life Lasair, "Hell thereafter from me" Attracta, "Wise in words and honorable in all things" Cranat, "My body to be thus under [my] control" Gobnait, "How many years make up a nameplace" Dígde, "They shall never be without some wonderful glorious nun/old woman [caillech] among them" Conclusion Conclusion Appendices Appendix A: The Sites (photos and a map) Appendix B: The Sources (with an introduction)i. Catalogue of the Saints of Irelandii. Darercaiii. Brigidiv. Ítev. Samthann Appendix C: Calendar of Feast Days Appendix D: Pronunciation Guide Appendix E: Glossary